Germs cannot insist, if the cells can resist. 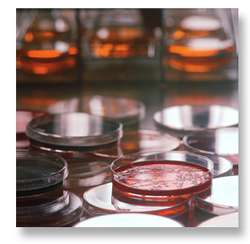 I recommend specific supplements in this website that have helped me heal from Epstein Barr Virus (EBV).  The following are clinical studies documenting the effectiveness of these supplements.  Keep in mind that EBV is part of the herpes family of viruses:

•  Acidolin is the natural antibiotic extracted from the DDS strain of L. acidophilus.  In this paper, “Acidolin: An antibiotic Produced by Lactobacilus acidophilus,” published in The Journal of Antibiotics, I.Y. Hamdan and E.M. Mikolajcik explained their 1974 study.  After culturing colonies of the polio virus and cowpox, they added various concentrations of acidolin. They confirmed that a dilution of 1 part acidolin to 80 parts inert liquid produced “complete disintegration” of both the polio and cowpox cells.  The potential viral troublemakers were turned off, deactivated, and terminated.

•  In 1991, the Dept. of Medicine of the Univ. of Washington set up a controlled in vitro study to address the problem of transmission of the HIV virus.  In a paper entitled “Effect of Lactobacillus acidophilus on Human Immuno-deficiency virus Type 1,” S.J. Klebanoff and R.W. Coombs reported that lactobacteria, may help defeat the HIV virus.

•   Until recently, scientific texts on the natural treatment of herpes agreed that certain enzyme mixtures (containing papain, lipase, bromelain, protease, rutin, invertase….) can act against viruses and its immune complexes, especially if administered early and in high enough doses.

Professor Max Wolf from the Biological Research Institute, New York, discovered the connection between enzyme therapy and viruses while treating dairy cattle suffering from papillomatosis (benign skin tumors).  He injected the cattle with enzymes. The tumors disappeared within a few days and the cattle returned to health.  Since Wolf was aware that papillomatosis was caused by a virus, he concluded that the enzymes had deactivated the virus.  He speculated that the enzymes had degraded the proteinaceous “foot” of the virus (used to attach itself to normal cells), thus made it impossible for the virus to penetrate the wall of the host cell.

Since 1968, hundreds of herpes patients have been treated with enzymes therapy at Dr. W. Bartsch’s Rehabilatations-Centrum Urbachtal Und Klinik.  As a result of his research, Dr. Bartsch found that proteolytic enzyme therapy was the most effective in herpes treatment because it was free from any side effects.

Dr. Bartsch believes that if treatment is begun at the onset of herpes symptoms and dose levels are adequate, then it is possible to obtain success against post herpes neuralgia (the intense burning or stabbing pain caused by irritation of or damage to a nerve).

Another  study by Dr. Billigmann in 1995 was published to confirm that enzyme therapy had been effective on the herpes zoster virus in Dr. Bartsch's previous 1968 study.  In a controlled study with 192 patients, the objective was to compare the effectiveness of enzymes with that of a standard drug called acyclovir. The high costs of treatment with this drug and others often meant patients with Herpes zoster would not receive medicinal therapy. Dr. Billigmann concluded that overall the enzyme preparation showed identical efficacy with the drug acyclovir, and thus also confirmed the results that the Herpes zoster virus has been successfully dealt with since 1968 with enzymes. Enzymes are considered one of the best anti-viral therapies with very few side-effects while also providing significant pain relief for the patient.